Eugene Dumais noticed a large crack in the side of his house as he was leaving for church around 9:45 a.m. When he returned, a 10-foot-wide section of retaining wall had slid away. Elsewhere in the 80-home Rivermist subdivision, soil gave way and left crevices up to 15 feet deep and eight feet wide. 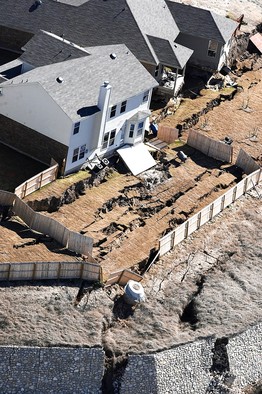 Associated PressCrevices, some 15 feet deep, are shown outside three homes at the Rivermist subdivision in San Antonio on Monday.

“It’s bad, and it has gotten a lot worse,” Mr. Dumais said. He was among dozens of homeowners evacuated over the weekend from the neighborhood—a freshly built enclave where home prices range from $170,000 to $250,000.

Centex Homes, a unit of Pulte Homes Inc., told about 250 residents who crowded into a hastily called meeting at a local hotel Monday evening that it had yet to determine what caused the mishap, though it said the soil weakness occurred in a relatively isolated area. An executive said the company planned to start “forensic” work Tuesday, a process expected to take a couple of days.

Residents of more than 60 of the 80 homes vacated under a mandatory evacuation order by the city have been told they can return. Still, many at Monday night’s meeting weren’t anxious to return without a better explanation from Centex.

“I’ll tell you what, you come tonight and sleep in my house,” one homeowner shouted during the event. “I’ll sleep in yours.”

Centex said it was temporarily paying for evacuees to stay in hotels.

The company said it had spent most of Monday using piers to shore up homes in the area where it believes the problem began. It also used backhoes to remove soil from a hillside below many of the homes.

At least seven streets had to be closed after the soil started shifting. Fire officials estimated the ground had been slipping at a rate of about four inches an hour, the Associated Press said.

Pulte said that after a thorough review by third-party geotechnical and structural engineers, the company was helping coordinate the re-occupation of the vacated homes.

Jeff Davis, an attorney who had been asked to attend the event by one of the homeowners, said a better explanation of the problem was needed, both to reassure homeowners and to protect their investments.